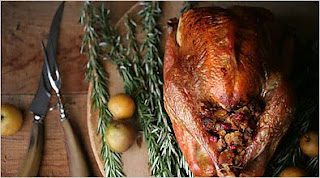 This week marks the beginning of the gluttony season, the time when even the most health-conscious diner succumbs to the temptations of the holiday buffet.

But is pigging out during the holidays a harmless indulgence or a real health worry? Indigestion, flatulence and the need to unbutton tight pants are the most common symptoms triggered by the Thanksgiving Day binge. But vast helpings of turkey, stuffing and candied sweet potatoes can take a more serious toll. Big meals can raise the risk for heart attack, gallbladder pain and dangerous drowsiness on the drive home.

Every bite of food, whether it's part of a huge Thanksgiving meal or a weekday lunch, travels on its own fantastic journey through the body, touching off a simultaneous release of hormones, chemicals and digestive fluids. The average meal takes 1 to 3 hours to leave the stomach. But a large meal can take 8 to 12 hours, depending on the quantity and fat content.

The average American consumes about 4,500 calories and 229 grams of fat throughout Thanksgiving Day, according to the Calorie Control Council, which represents makers of low-calorie foods. "It's like a tsunami of fat coming into the body," said Dr. Pamela Peeke, assistant clinical professor at the University of Maryland School of Medicine.

Average stomach capacity is about 8 cups, although it can range from 4 to 12, said Dr. Edward Saltzman, an assistant professor of medicine at Tufts University. A stretched stomach prompts the release of chemicals that tell the brain it's full. But some holiday diners, faced with a sumptuous buffet of mashed potatoes and gravy, green bean casserole and pumpkin pie, keep eating.

Experts say the ability to ignore satiety signals is an evolutionary adaptation that helped build fat stores during times of plenty. Even so, the body eventually puts a stop to the binge. After about 1,500 calories in one sitting, the gut releases a hormone that causes nausea, says Susan B. Roberts, director of the energy metabolism laboratory at Tufts.

Although your stomach may feel as if it will burst, gastric rupture is extremely rare, notes Dr. William Goldberg, a New York emergency room physician whose book "Why Do Men Have Nipples?" explores the issue. The problem is usually limited to people with major eating disorders; in a study of people who had died with Prader-Willi syndrome, which causes excessive overeating, about 3 percent of the deaths were due to stomach rupture, said Dr. David Stevenson, an assistant professor at the University of Utah.

But while your stomach won't burst after a big Thanksgiving meal, overeating will make your body work harder. The extra digestive workload demanded by a food binge requires the heart to pump more blood to the stomach and intestines. Heavy consumption of fatty foods can also lead to changes that cause blood to clot more easily, said Dr. Francisco Lopez-Jimenez, a researcher at the Mayo Clinic College of Medicine.

As a result, heart attack risk appears to surge. Dr. Lopez-Jimenez led one study of 2,000 people that showed a fourfold increase in heart attack risk in the two hours after eating a big meal. Israeli researchers reported a sevenfold risk. "Someone who eats three times the normal calories of a regular meal will have an extra workload for the stomach and intestines and therefore the heart," Dr. Lopez-Jimenez said.

Dr. Goldberg says the digestive workout may also explain the "food coma" many people experience after a big meal. Although popular wisdom holds that Thanksgiving drowsiness is caused by tryptophan, an amino acid found in turkey, Dr. Goldberg notes that the amount isn't significant enough to affect most people.

For most people, food fatigue just brings on the need for a nap, but for travelers it is also a safety risk. "A lot of families as soon as they are done eating say, 'Let's get back on the road,'" said Dr. Carol Ash, the medical director of Sleep for Life, a sleep disorders program in Hillsborough, N.J. Dr. Ash notes that food fatigue, along with holiday alcohol consumption, the monotony of driving and a natural circadian dip late in the day all make for a lethal combination behind the wheel.

As the stomach releases food into the intestines, the gallbladder begins to squeeze out bile to help with fat digestion. Like the rest of the body, it has to work harder after a big meal — a frequent cause of gallstone attacks, which occur when clusters of solid material get stuck in the narrow duct that connects the organ to the intestine. These attacks are seldom fatal, but the pain mimics a heart attack and can be excruciating. Many people don't know they have gallstones until an attack occurs.

Large meals increase the risk for flatulence, because bits of undigested food slip into the colon and begin to ferment. And people with existing health problems that require special diets have to be careful about their intake of salt, fat and calories at Thanksgiving.

Simple strategies can help minimize the gluttony. Keep the serving dishes in the kitchen, so you won't take extra helpings mindlessly. Use smaller serving spoons and plates. In one study, Brian Wansink, a researcher at Cornell University, found that the bigger the bowl and serving spoon, the more ice cream people tended to eat.

Finally, contribute to the dinnertime conversation. The more you talk, the less you'll eat.


Copyright 2007 The New York Times Company
Posted by Torrie Gruber at 7:26 AM 2 comments:

Email ThisBlogThis!Share to TwitterShare to FacebookShare to Pinterest
Labels: Reading level B-2+ 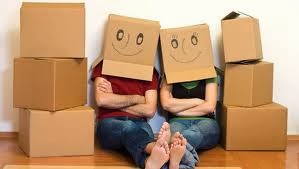 killing me- very difficult for me

I know what you mean- I understand

walking distance- very close, you can walk there

not working out- It's not good for what I need

landlord- person who owns the building

budget- how much money you have to use

utilities- electricity, water, gas, etc. You usually have to pay extra for these

Henry: I am so tired of my commute to work. Driving all those hours is just killing me.

Lance: Yeah, I know what you mean. I used to drive two hours to work each way. But now I live within walking distance of my work. It's great.

Henry: You're kidding. I didn't know that. Did you move?

Lance: No, I got a new job near my work.

Henry: Well, I don't think I can change my job, but I am thinking about changing my apartment. The one I have just isn't working out.

Lance: What's wrong with it?

Henry: Well, besides being too far from work, I'm having some problems with my landlord. He keeps raising the rent, but he never does any repairs. Everything is breaking down.

Lance: That's terrible. Listen, I think there is a vacancy in my apartment building. And my landlord is excellent. And I'm sure it would be closer to your work than you are now.

Henry: Really? But is it expensive? My budget isn't that big.

Lance: No, it's not that expensive. And it's furnished and the utilities are included.

Henry: That sounds great. I'd love to see it. When can we go?

Lance: How about now?

Click on link   HERE
Posted by Torrie Gruber at 9:36 PM No comments:

For each sentence, choose the best word to complete the gap from the choices below.

(SCROLL DOWN FOR ANSWER KEY)

Email ThisBlogThis!Share to TwitterShare to FacebookShare to Pinterest
Labels: Exam B-2 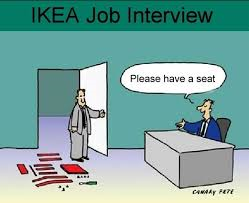 resume- a summary of a person's work and education

responsibilities- things that must be done

to oversee- to be the boss of, to make sure something is done, to supervise

to keep track of- to be aware of or notice something

inventory- the number of items a store has

to handle- to take care of, to deal with

to be transferred- to be moved from one place to another

an opening- an available job

a position- a job

to jump on something- to do something immediately


Listen and read the interview.  Begin Here
Posted by Torrie Gruber at 8:08 PM No comments:

Email ThisBlogThis!Share to TwitterShare to FacebookShare to Pinterest
Labels: Business English, Listening A-2 B-1

How to Smile for Happiness

Edited by 80_Calo, Tiagoroth, SgtMajorKululu, SmileBomb and 14 others
Smiles (or what appear to be smiles) are contagious. You can easily Stand Out from the Crowd by smiling, and at the same time, improve your happiness. In fact, smiling helps make you feel much much better emotionally, because it releases endorphins, brain chemicals that relieve pain and increase your feelings of contentment. Moreover, smiles are contagious, which means you can increase the happiness of others around you simply by sharing one, whether or not you know the person. If you'd like a very easy and effective way to lighten your own mood and the atmosphere around you, try smiling more, all for the sake of happiness.

Posted by Torrie Gruber at 10:08 AM No comments:

cure (n,v)- something that makes you well after being sick

fever (n)- heat in your head and body

remedy- (n) cure, something that makes you well

to get over (v)- to finish
Many people catch a cold in the springtime and/ or fall. It makes us wonder... if scientists can send a man to the moon, why can't they find a cure for the common cold. The answer is easy. There are literally hundreds of kinds cold viruses out there. You never know which one you will get, so there isn't a cure for each one.
When a virus attacks your body, your body works hard to get rid of it. Blood rushes to your nose and brings congestion with it. You feel terrible because you can't breathe well, but your body is actually "eating" the virus. Your temperature rises and you get a fever, but the heat of your body is killing the virus. You also have a runny nose to stop the virus from getting to your cells. You may feel miserable, but actually your wonderful body is doing everything it can to kill the cold.
Different people have different remedies for colds. In the United States and some other countries, for example, people might eat chicken soup to feel better. Some people take hot baths and drink warm liquids. Other people take medicines to stop the fever, congestion, and runny nose.
There is one interesting thing to note- some scientists say taking medicines when you have a cold is actually bad for you. The virus stays in you longer because your body doesn't have a way to fight it and kill it. Bodies can do an amazing job on their own. There is a joke, however, on taking medicine when you have a cold. It goes like this:
If takes about 1 week to get over a cold if you don't take medicine, but only 7 days to get over a cold if you take medicine.

If you pay peanuts, you get monkeys 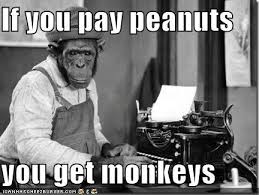 Variety: This is typically used in British English but may be used in other varieties of English too.Quick Quiz


"If you pay peanuts, you get monkeys" because
Posted by Torrie Gruber at 9:49 AM No comments: