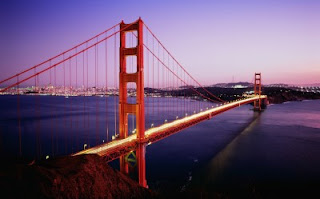 Read about San Francisco and practice your relative clauses!

Construction on the bridge began in 1933 and was completed in 1937. The bridge rises 230 m above the water. With its total length of 1970 meters it was the longest (Hängebrücke) suspension bridge in the world until 1964. The bridge is part of the United States Highway 101, has six (Fahrspuren) lanes and a footpath on each side.

Thanks to Ego4U.com
Posted by Torrie Gruber at 7:36 AM